Plus Size Barbie Slammed For Not Representing Larger Ladies 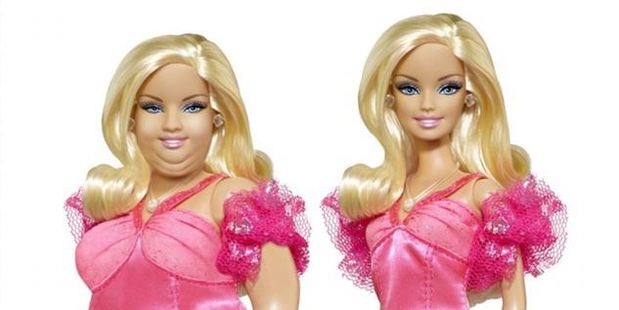 A mocked-up image of a plus-size Barbie beside a traditional Barbie has sparked a debate about the doll's impact on female body image.

The Facebook group Plus Size Modeling shared the powerful post a week ago, with the question: 'Should toy companies start making plus-sized Barbie dolls? In all honesty, we want to know...'

Since then, it has generated over 36,000 likes and over 1,800 shares - as well as mostly negative comments from many who felt the plus-size Barbie was an inaccurate representation of curvy women.

And Lindsay Keg-leg Kahlig commented: "[The] average [dress] size these days is 14-16. A doll that shows real life perspective, rather than the ideal unhealthy weight like 0 or unhealthy negative display of obese is a better more healthy approach [sic]."

Lauren Johnson wrote: "I think the double chin is ridiculous!"

And MaryBeth Gafford said: "The triple chin is too much. Most overweight people (me included) only have a double chin no matter what size they are. This Barbie is inaccurate." 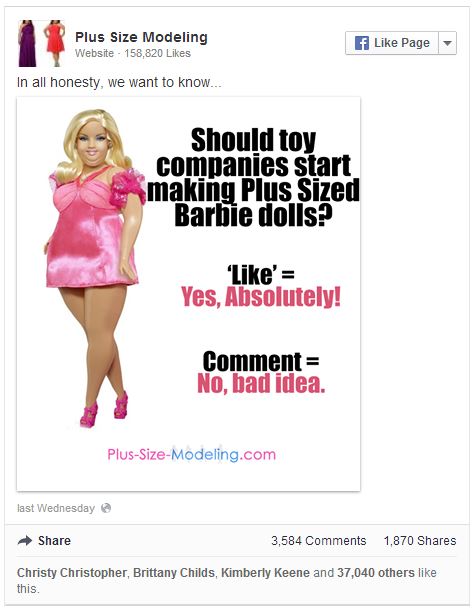 The dominant opinion, though, was that that there should be a middle ground. Rather than promoting an exaggerated 'obese' Barbie, young girls should have a healthy-looking doll that is neither too fat nor too thin.

"Why not have a realistically proportioned Barbie that promotes healthy diet and exercise?" Michelle Ashford suggested, while Bec Bailey wrote: "Not plus size but definitely healthy weight. A size 12-14 girl would be a great image. Too low or too high a BMI promotes unhealthy living."

The image was produced by Worth1000.com rather than Barbie's manufacturer, Mattel, and so if the company was to consider a plus-size Barbie, it might look very different.

Artist Nickolay Lamm, 24, from Pittsburgh, Pennsylvania, created a Barbie-like doll based on CDC measurements of the average 19-year-old woman, and photographed it alongside a traditional Barbie doll.

"If Barbie looks good as an average sized woman in America, what's stopping Mattel from making one?"

His research into the iconic doll found that if she were to exist as a human, Barbie would weigh about 49kg and would have a BMI of 16.24. This would fit the weight criteria for anorexia.

He told Huffington Post at the time: "A realistically-proportioned Barbie actually looks pretty good in the pictures I produced.

"So, if there's even a small chance of Barbie in its present form negatively influencing girls, and if Barbie looks good as an average sized woman in America, what's stopping Mattel from making one?"