Pill Camera to Screen for Colon Cancer Approved in U.S.

PillCam Colon is designed to transmit images for about 10 hours. (Courtesy Given Imaging)

An ingestible pill camera to help screen for polyps and early signs of colon cancer has been approved for use in the U.S.

Given Imaging Ltd.'s PillCam Colon was originally touted as an alternative to traditional colonoscopy procedures, but the company's research found images taken by the mini-camera aren't as clear as those taken during the more invasive procedure.

The U.S. Food and Drug Administration approved the device for patients who have experienced an incomplete colonoscopy. The company estimates 750,000 U.S. patients are not able to complete the procedure each year, due to anatomy issues, previous surgery or various colon diseases.

"Colonoscopy is the most comprehensive option, but for up to 10 per cent of individuals, achieving a complete colonoscopy may not be possible," Eric Hargis, CEO of the Colon Cancer Alliance, said in a release.

In 2001, Given Imaging received FDA approval for a similar device that images the small intestine.

The newly approved capsule has two miniature colour video cameras, a battery and light source. Once the patient ingests the capsule, it is designed to transmit images for about 10 hours. 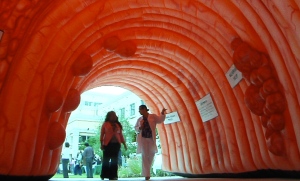 A tour inside a giant inflatable colon used during community outreach programs. Patients in the U.S. who have trouble undergoing standard colonoscopies may now be eligible for screening with an ingestible pill camera. (Suzette Laboy/Associated Press)

Data is transferred from the device to a computer to be compiled. A doctor later reviews and reports the results.

Risks of the procedure include capsule retention, aspiration and skin irritation. Before the capsule is excreted, patients should not be near powerful electromagnetic fields, such as those created by an MRI device.

The PillCam Colon is commercially available in Canada, Japan, Europe, Latin America, Australia and parts of Asia and Africa.

Given Imaging also develops technology to visualize, diagnose and monitor the digestive system, including with its PillCam, a swallowed capsule endoscope.

A report by the Canadian Partnership Against Cancer suggested that in 2011, half of Canadians aged 50 to 74 surveyed said they were up to date with their colorectal cancer screening — a fecal occult blood test in the past two years and colonoscopy in the past five years.