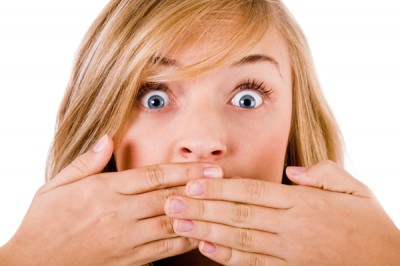 …Me!! …bad breath!!...Nope, not me!!… this question haunts nearly 60 million Americans who suffer from halitosis.

Halitosis is described as an unpleasant odor exhaled while breathing and is rated among the top three most common patient concerns in the dental office, even more common than braces consultations (according to Dr. Geoffrey Speicer, The University Of Sydney, Australia). True halitosis is mostly originated in the mouth as result of gases (sulphur compounds) produced by bacteria present in dental plaque as biofilm build up, this is present in dental caries, gum disease and normally starts building up after 10 to 12 hours anywhere in the mouth. Only 10-15 % of halitosis is caused by systemic conditions such as respiratory and gastrointestinal problems, liver and kidney diseases, some types of cancer, diabetes and even some low carb diets. Some people that are overly concerned with bad breath may even suffer from Olfactory Reference Syndrome, imagining that have halitosis (Delusional Halitosis). When Biofilm builds up in the throat, it lodges on the tonsils and is difficult to remove, thus calcifying becoming tiny stones known as Tonsiloliths that when released, produce a foul smell. Of course diet has something to do with bad breath, but this type of halitosis is transient and will disappear after brushing and flossing, unless your diet consists strictly of garlic fries and macchiato frappe lattes that is !!

To diagnose halitosis can be tricky. Do not rely on  other people’s opinion unless you really trust them or on their reaction when you are near them, for this are not dependable methods that can be influenced by so many factors. Your dentist can actually measure bad breath such as the Halimeter (www.halimeter.com), BANA test and even gas chromatography, but these professional methods, although reliable, are nevertheless, costly.

A dependable way to see if you suffer from halitosis is to scrape the top of your tongue (the tongue traps as much as 75% of biofilm build up!) with a tongue scraper or a spoon, and let the substance dry. If this matter turns dark yellow, is indicative of sulphur compounds (present in rotten eggs!) and the odor will be indicative as well !!

Most traditional treatments just mask the symptoms and quickly fade away. Good oral hygiene including thorough brushing and flossing and regular visits to the dentist will account for most types of halitosis. Some medicated rinses like PLAX (www.colgate.com), and even some types of chewing gums (as a dentist I thought I would never say this!! ) can also be beneficial. Make sure this gums display the ADA logo( www.ada.org ), or they will be just regular gum and will not help solve the problem, just the symptoms. More severe cases require the use of professionally recommended “Bad Breath Kits”, such as Breath R-X (www.discusdental.com)  and K-FORCE Oral Health (www.breezecare.com)  that use bacterial control substances such as probiotics like K-12 (www.blistechnologies.com).

Make sure to consult your dentist before using any of these products. Complement any treatment with a well balanced, healthy diet and a regular exercise program and don’t let your breath run you out!