Heart Attacks May Be Linked to Psoriasis

In October 2006 the Journal of the American Medical Association (JAMA) reported that psoriasis increases a person’s chance of having Cardiovascular Disease and Heart attack.

According to National Psoriasis Foundation, Psoriasis is a skin disorder characterized by itchy, reddened, rash-like patches or lesions. Doctors think it may be an autoimmune condition. It occurs when the immune system sends out faulty signals that speed up the growth cycle of skin cells. Psoriasis is not contagious. 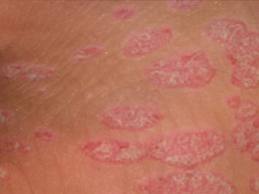 How does this relate to a heart problem?

While inflammation is part of the body's normal healing process, it isn't always helpful. In cardiovascular disease, it can make the cholesterol-rich plaques of atherosclerosis less stable and more likely to rupture, potentially triggering a heart attack or stroke.

Psoriasis is widely seen as a dysfunction of the immune system, with too many skin cells being pushed to the surface too quickly. Both psoriasis and cardiovascular disease are associated with higher than usual levels of inflammation, leading experts to suspect that it may represent the bridge that links them.

In a study from the University of Pennsylvania researchers examined data on more than 130,000 individuals with psoriasis, and an even larger control population of persons ranging in age from 20 to 90 years old. The authors concluded that heart attack risk was "greatest in young patients with severe psoriasis."

They found that people in their 30's who had severe psoriasis were about three times more likely to have a heart attack than young people without psoriasis. The authors also noted that people 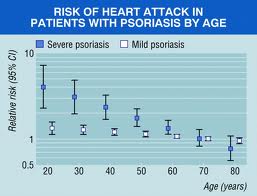 with psoriasis were at greater risk for other chronic health problems, including smoking and obesity.

Another study, presented at the annual meeting of the American Academy of Dermatology in Miami Beach, Fla., showed psoriasis is associated with an increased risk of cancer, including skin cancer, prostate cancer, and lymphoma.

If you have psoriasis or know somebody that suffers of it you need to start thinking in changing to a healthier life style.

You can find more information at http://www.psoriasis.org/