7 Lessons We Can Learn From Michael Jordan 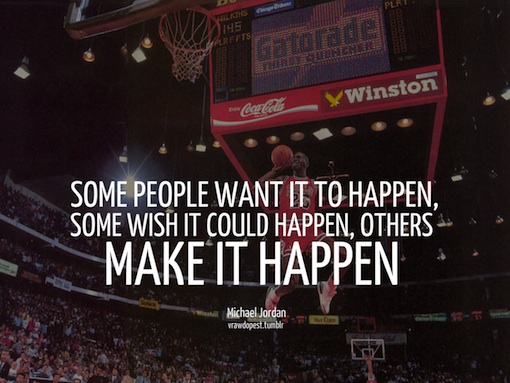 If we want to achieve great results and be successful in life, we need to learn from those who had been there and done that.

Michael Jordan has the qualities to be successful and he is definitely a great role model that we can learn from. Michael Jordan is a guy who was cut out of his varsity basketball team because he was deemed too short to play but he turned out to be highly successful in his basketball career and is known as a legend in the game.

His favorite quote is “Obstacles don’t have to stop you. If you run into a wall, don’t turn around and give up. Figure out how to climb it, go through it, or work around it.”

7 Lessons We Can Learn From Michael Jordan

1. Our Own Expectation
“You have to expect things of yourself before you can do them.” Michael Jordan
2. Do not fear failure
“I’ve missed more than 9000 shots in my career. I’ve lost almost 300 games. 26 times, I’ve been trusted to take the game winning shot and missed. I’ve failed over and over and over again in my life. And that is why I succeed.” Michael Jordan
3. Just Try
“I can accept failure, everyone fails at something. But I can’t accept not trying.” Michael Jordan
4. Don’t Give Up
Michael Jordan never given up and that is why he is being regarded as a legend in the basketball game and not a drop out of the varsity basketball team. He was cut from the varsity team but that doesn’t mean the end of his dream. Instead of whining and complaining, he doubled his effort in training and made it into his varsity roster.
5. Hard Work
“I’ve always believed that if you put in the work, the results will come. ” Michael Jordan
6. Make Things Happen
“Some people want it to happen, some wish it would happen, others make it happen.” Michael Jordan
7. Passion
“Even when I’m old and grey, I won’t be able to play it, but I’ll still love the game.” Michael Jordan

In summary…
There are plenty of role models in this world that we can learn from and Michael Jordan is one of them. He had shown us that achieving is possible and all we need is to believe in our own capabilities, don’t be fearful of failure and work hard to achieve results. If you want to achieve more out of your life, the teachings of the 7 lessons above will definitely help.

You only live once “When they back the ‘hearse’ up to the front door, they are not making a practice run.” – Van Crouch