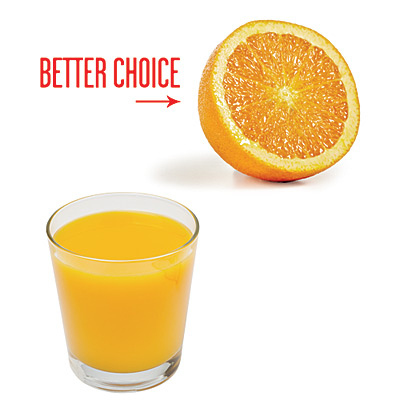 Sometimes eating healthy isn’t just about eating less. It’s about still eating, but making better choices for what you eat. Here is a compilation of 18 healthy swaps you can make to cut calories, fat, or add important nutrients to your snacks, meals, and drinks!

Instead of Bagel
TRY Whole Grain English Muffin
Why This swap can save you over 200 calories! A bagel is equivalent to approximately five bread slices whereas an English muffin is more like two bread slices.

Instead of Juice
TRY Whole Fruit
Why Juice tends to be high in sugar and low in fiber. Fresh fruit, on the other hand, contains more fiber than the juice and has a higher water content, both which are excellent for weight loss. Eating an orange instead of guzzling down a pint of orange juice can save you over 150 calories.

Instead of 4 French toast sticks
TRY 2 whole-grain waffles
Why Choosing the light, airy waffles will save you 202 calories and add fiber.

Instead of Vegetable soup
TRY Split pea soup
Why You’ll get 10 grams of protein. That’s more than what’s in a glass of milk or an egg.

Instead of Meat lasagna
TRY Cheese ravioli
Why Compared with the lasagna, the ravioli is downright skinny—it has roughly half as much total and saturated fat.

Instead of Rice
TRY Baked potato
Why That spud has nearly three times the fiber you’d get in a cup of cooked rice. You’ll also get 20 percent of your daily dose of potassium, which helps control blood pressure.

Instead of Spinach
TRY Broccoli
Why The calcium in broccoli—it has as much as 1⁄4 cup of milk—is much more easily absorbed than the calcium in spinach.

Instead of Small order of nachos
TRY 1 cup chili with 1 Tbsp lowfat shredded Cheddar cheese and 10 tortilla chips
Why You’ll still get a cheesy, crunchy dish, but for at least 300 calories and 20 fat grams less. Beans are a great source of protein and fiber, too.

Instead of Flavored water
TRY 4 oz grape juice mixed with 4 oz seltzer
Why Grape juice has resveratrol, which may keep your heart healthy

Instead of Cheese Calzone
TRY Slice of Stuffed-Crust Pizza
Why The pizza has 410 fewer calories and 12 fewer grams of fat. 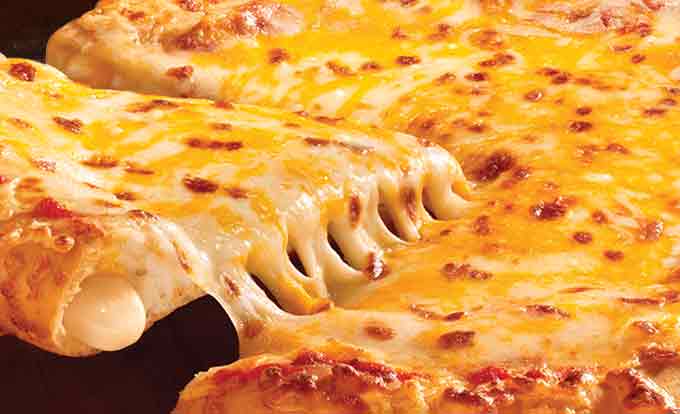 Instead of Flour Tortillas
TRY Corn Tortillas
Why Stuff tasty fixings into 2 (6-inch) corn tortillas, rather than one (10-inch) flour tortilla and save 450mg of sodium.

Instead of Vanilla Frappuccino
TRY 2% Iced Vanilla Latte
Why Even with 2% milk and no whipped cream, a 16-ounce Frappuccino contains 300 calories, mostly from the whopping 67g of sugar. Switch to an iced 2% vanilla latte, and save 40g. Skip the flavoring and order nonfat milk for a refreshing sip with only 11g sugar.

Instead of Bran muffin
TRY A bowl of Raisin Bran
Why Coffee shop muffins can weigh in at 400 calories or more. Eat your bran with a spoon, using 2/3 cup 1% low-fat milk. You’ll gain 2g more fiber than the muffin and 200mg bone-building calcium.

Instead of Full-fat Chocolate Ice Cream
TRY Ice Cream Sandwich
Why Choose an ice-cream sandwich over a scoop of premium full-fat chocolate ice cream, and you’ll save 100 calories plus 8g sat fat (almost half of a day’s limit).

Instead of Peanuts
TRY Edamame
Why They’re heart-healthy, yes, but the peanuts contain 200 calories per 1/4 cup. Swapping with 1/2 cup shelled edamame, sprinkled with 1 teaspoon toasted sesame seeds and not only do you lose 100 calories, you gain 4 more grams of protein, too. 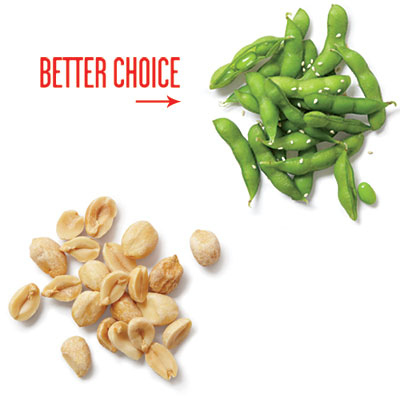